Twenty Thousand Leagues Under The Sea by Jules Verne (Review) 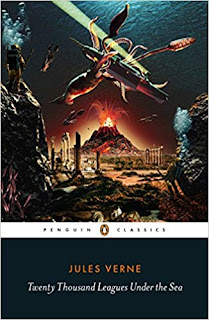 by Jules Verne. It was a fabulous book written in 1869-1870 in French. I have seen the page length vary. The translation from Penguin Classics is 504 pages. I found that was about 250 pages. The chapters are short and filled with nautical words. Once you get used to fathoms and leagues, the story is captivating and mysterious. I could not put it down.
Amazon describes the book this way, "'Immediately a long tentacle reached in through the opening like a snake, and a score of others waved about above it'

At first they think it is a giant sea monster - a vast black object, menacing the oceans and causing panic over the world. Yet when Professor Aronnax joins an expedition to hunt down the creature, he and his two companions discover it is a giant submarine, the Nautilus. Captured and held prisoner on board by its captain, Nemo - unpredictable, enigmatic, exiled from humanity - they have no choice but to travel the underwater depths with him, encountering coral reefs, polar ice, the city of Atlantis and a terrifying giant squid that tries to drag the Nautilus down into the deep. Combining thrilling adventure with scientific facts and a wonder at the natural world, Jules Verne's most enduringly popular novel is brought to life in David Coward's vivid new translation."

Translated with an introduction and notes by David Coward

Project Gutenberg has a free version you can download here. I read an enjoyed that version.