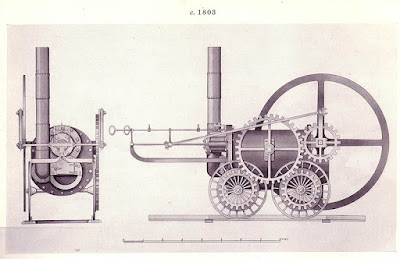 On January 21, 1804, in Wales, Samuel Homfray bet 500 Guineas that a new invention called the steam engine locomotive could carry 20,000 pounds of iron, nearly ten miles. Richard Trevithick (13 April 1771 – 22 April 1833) had invented a high-pressure steam engine he called the Puffing Devil and had successfully tested it carrying six people in 1803. Richard was an inventor and passionate about his train. The year before one of the engines he invented blew up and killed four men.

On a Tuesday in February, where the temperature can be as low as 39 degrees, the boiler was heated. The locomotive started to generate steam. Richard loaded five wagons with all the iron along with seventy people to embark on the world's first railway journey. The trip to the little river village Abercynon of Wales would take some time. Who would win the bet? After some four hours, going a little faster than two miles per hour, Samuel Homfray won, no explosions and no problems (at least on the way there). Samuel was 70,000 dollars richer, and the world had seen its first successful steam locomotive journey.

Today, railroad track fills the world, and we look for faster was to transport goods and people. Yet, for some, trains are a lovely leisurely journey through mountains and valleys and fields, seeing another side of the country. For others, trains offer an economical mode of transport, efficient and safe.

What drives a person? What drove Richard Trevithick to invent a new engine? A desire for a name, money, control, fun? What drove Samuel Homfray to bet on the locomotive versus against it? Money or adrenaline? What drove the seventy passengers that day to ride along, to be the first, novelty, or an invitation?

In the Bible, Jesus was driven too. In Luke 4 it says, "...Jesus, full of the Holy Spirit, returned from the Jordan and was led by the Spirit in the wilderness for forty days, being tempted by the devil. And he ate nothing during those days."

I find it shocking that the Holy Spirit led Jesus into the wilderness. I would not bet that Jesus would go there. It doesn't make sense. Why not the beach or on top of a mountain? Why the desert? Then the Holy Spirit led him to a place where he was not comforted by angels but confronted by the devil. Why? And then, and then, if that is not all. He ate nothing. Did the Holy Spirit lead him to fast? Why? Why would a person subject himself to such temptation? When I am hungry, I get tempted to sinful anger. When I am lonely, I get tempted. Why put yourself in such a situation? Why?

The devil tempted Jesus. Jesus passed each the test. Reading the story, it seemed too easy. However, how would we do under the same pressure?

Why is this passage here? Why did Luke include this? There are probably many reasons.


I love how the story ends. Jesus wins. The Devil leaves. And Jesus returns in the power of the Spirit (Luke 4:14).

I think we all would bet on Jesus to win. It seems insane for the creator and sustainer of the universe to give in to any of the Devil's temptations. However, replace Jesus with yourself, how would you fare? How would I do being led in such a way? I know I need a savior and would need all the help I could get in such a situation. I think that is the point. Jesus did not come on the scene for us to just follow him as an example (He is an example), but he came for us to find hope in him. He can overcome the very weakness we feel when we skip a meal or fall prey to a passing temptation, through that Spirit that is now at work in us. The truth of the matter is we have given into temptation many times. Haven't we? Jesus came, lived, died, and rose to forgive us of our sins and empower us by his Spirit to have victory in Jesus. He did and does what we have not done nor could do apart from him.

We are on a short journey in a life filled with temptations. God's Spirit fills, empowers, leads, and guides. I would take this as an encouragement. That "Little children, you are from God and have overcome them, for he who is in you is greater than he who is in the world" (1 John 4:4). He who helped Jesus can help us. It still is hard to swallow that God may lead us into a dessert. Yet, He is the creator of the universe, all wise, and sovereign. He is good, and He is God. Our job is to trust and obey and seek His help along the way. We should pray he leads us not into temptation. Simultaneously, in the temptation, we can remind ourselves of the truth of scripture that God is in us, with us, and empowering us to say no.

Whom are you trusting? Who is leading you? Whom are you following? What is driving you? What motivates you? What are you investing your life in? How do you handle temptation? What is your view of the spiritual world? Where are you going in life? I read this story in Luke 4 and insert myself and ask these questions. 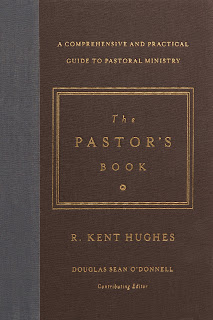 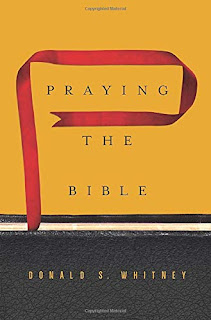 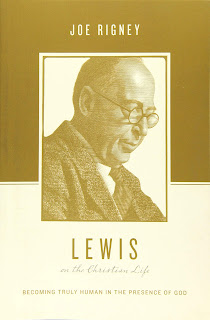 Lewis on the Christian Life: Becoming Truly Human in the Presence of God by Joe Rigney (Free) 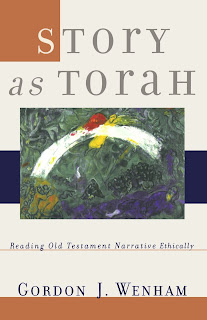 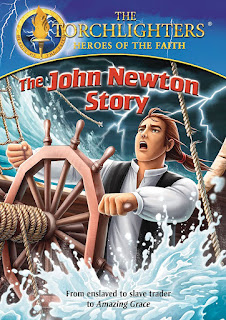 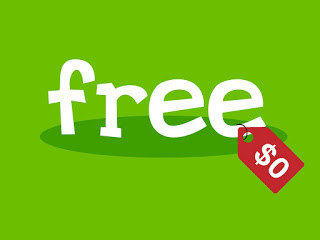 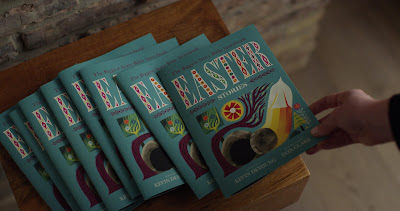