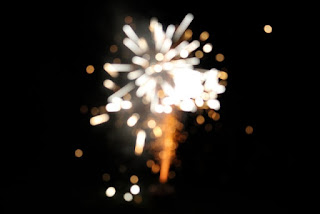 Have you made plans only to have them fall apart? When I went off to college, I was planning on being a doctor. Two decades later, I am not. When I think of going to graduate school to be a pastor, I am reminded that it took me nearly a decade to be pastoring full-time. What is the shortest distance between two points? A straight line. I like to think I know what God should do with my life, but he knows better. This 4th of July season reminds me of another plan that took a disastrous turn. It was a firework fail. I went to a friend's place for the Fourth of July. He hosted a fun family get-together with food and fireworks every year. As dusk approached, a few dads moved to the edge of the yard to get the show on the road—the rest of us set up lawn chairs and blankets to watch. During the evening, a dad ran away from an explosive he lit. He tripped on the launching tube, moving it in the direction of the crowd! We all scattered like there was a mouse loose in a 5th-grade classroom! (If we had smartphones then, the video would have gone viral). Thankfully, no one was hurt. After the dust settled, the party wasn't the same. We were in shock, and all decided it was a good time to pack up and go home. (I think that was the last Fourth of July party he hosted.) At church, we have been studying Proverbs. Solomon wrote it to help his sons live a good life in a godly way. It has hundreds of pithy, profound sayings. One reminds me of this fiasco, "The heart of man plans his way, but the Lord establishes his steps" (16:9). We can have grand plans and good intentions, but they may not work out. We can be thinking safety, fun, machismo, and God might be thinking humility, a lasting memory, and an early bedtime. But, he is ultimately in charge of the Universe. I hope that when the show goes well or busts, we will cling to God, who continues to be good and in control. He loves the world even when things don't make sense or blow up (see John 3:16).