Social Justice Through the Eyes of Wesley: John Wesley's Theological Challenge to Slavery by Irv A. Brendlinger (Free) 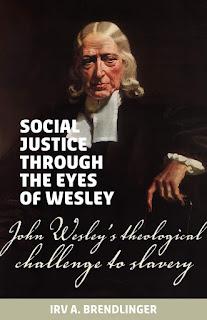 H&E Publishing and Joshua Press are giving away free the book Social justice through the eyes of Wesley: John Wesley's theological challenge to slavery

by Irv A. Brendlinger this month.

European enslavement of Africans and the development of the slave trade began in the sixteenth century. As the New World opened up, the slave trade thrived and slave labour became a significant economic force. Slavery itself was seldom challenged on humanitarian or religious grounds - in fact, evangelical leaders often used the Bible to justify slavery. In the late eighteenth century a notable exception emerged: John Wesley. Though little has been written about this dimension of Wesley's life, he was the first Christian leader of world renown to take a decisive stand against slavery. With wide-ranging analysis and depth, Dr. Brendlinger has brought to light the strength of Wesley's convictions about slavery and demonstrates how his theology compelled him to work to abolish it. From the writing of Thoughts Upon Slavery to his interactions with key players such as Wilberforce, Clarkson, Sharp and Benezet, Wesley utilized all means available to him to support the cause. The breadth of his authority and respect enabled him to influence Methodists (in England and America) to use their collective power to bring about radical societal change. Wesley's legacy to Methodism is extensive, but his contribution to the antislavery movement is singularly significant in bringing down the institution of slavery. This is his story. IRV BRENDLINGER is Professor of Church History and Theology at George Fox University in Newberg, Oregon. He holds a Ph.D. degree from the University of Edinburgh. 5.5" x 8.5" perfectbound, 292 pages

Get your copy here!