From Scotland to Canada: The Life of Pioneer Missionary Alexander Stewart Book by Glenn Tomlinson (Free) 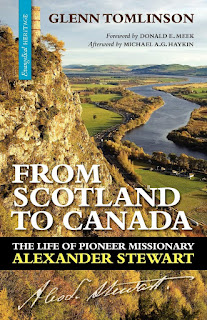 H & E Publishing is giving away free digital versions of the book “From Scotland to Canada: The Life of Pioneer Missionary Alexander Stewart

Alexander Stewart was converted to Christ during the dramatic revival in Moulin, in the Highlands of Scotland, in 1799. This revival fuelled a strong outpouring of missionary activity and church planting throughout Scotland. Stewart felt the call of God on his life and attended Robert Haldane's Theological Seminary, following this with years of evangelism and church planting in Perthshire. In 1818 Alexander and his wife, Janet, with their young family, emigrated to Upper Canada-the New World was opening up and many Scots were taking advantage of the promise of free land, employment opportunities and the excitement of a frontier life. Alexander saw it as an opportunity to bring gospel light to the settlers and new immigrants, as well as a place to raise his family. They eventually settled in York (now Toronto) and established the first Baptist church there. Stewart's church planting and preaching ministry also extended to the surrounding townships of Esquesing, Chinguacousy and Eramosa. Alexander Stewart's story is one of persistent zeal for the extension of God's kingdom and a fervent desire to do what he could to bring the gospel to a young country. Glenn Tomlinson has extensively mined the archives and resources from this time in Scottish and Canadian history to bring us this compelling story of a man determined to establish centres for the gospel in Scotland and Canada.

Download the epub and mobi format free with these links.