Words of Life Amid Hurt and Pain (Article) 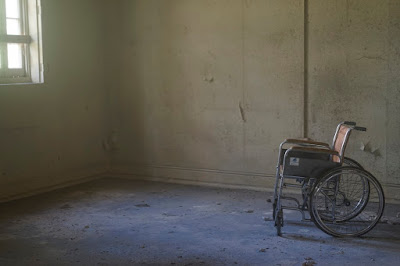 New Growth Press published an article yesterday I wrote about hurt, pain, and the Words of Christ.

“Do you want to see a picture of my dad I found?”

“Sure. When was the last time you saw him?”

“About twenty years ago.”

My friend Matt* wheeled his wheelchair around the room and pulled out a faded bent polaroid picture of his father with a white shirt yellowed over time, a beer, a friend, and a gal who was not his mom. They were laughing in the picture. Time has forgotten why.

Life has been hard for Matt. His parents never married and broke up early on. He has known a string of fatherlike replacements, but none have stuck. They were around for a while until a new one showed up. Maybe that was good. At five, he distinctly recalled the adults in his life smoking. He asked to try. One person thought it would be funny to give him something “better,” a hit of marijuana. That blazed a path of a nearly four-decade battle with addiction.

At eight months, Matt got Transverse Myelitis, causing paralysis from the waist down. Over time and treatment, he regained much of his motor ability, but not entirely. He was never quite like the other children in the schoolyard. With stiffness and a limp, he managed to rise above jokes and sneers. Years later, a car wreck broke his lower vertebrae and sped him back down a path of physical deterioration. Today, his daily exercise is limited to a shuffle to the restroom. Matt lives with chronic, debilitating, decentralized pain hindering his motivation and movement.

In school, he excelled academically. He was the kind of kid that didn’t have to study. However, he also excelled at rebelling. In college, Matt experimented with harder and harder drugs. Then something snapped; maybe it was an acid trip; possibly, it was genetics or a combination of both. He began to hear voices. He started having delusions: he could control inanimate objects from afar, he could read minds, he was Christ.

As decades past, he underwent another change. Something snapped again. He recognized, amid the cacophony of competing voices in his head, Jesus was the true Messiah, the Savior of the world. He realized he needed Jesus to save him as well. How did he come to know this? It was by the power of the Spirit at work in Jesus’s words.

Jesus spoke many things in the Bible; yet, some of his most life-giving words were when his life was draining away.

1. FORGIVE THEM (LUKE 23:34)
On the cross, Jesus had a heart of mercy for his murderers asking his Father to forgive them. Such words continue to teach forgiveness in a world of selfishness, sacrilege, retaliation, and revenge. How could Matt forgive those who abandoned him, led him astray, and hurt him deeply? Hearing Christ’s mercy has been an engine for Matt’s mercy to others.

2. WITH ME (LUKE 23:43)
At Jesus’s execution, to the right and left were two criminals. One mocked him, and the other believed in him. To the one who believed, Jesus promised paradise, to be “with me,” Jesus said. That “withness” offers hope for the hopeless and strength to weak and release for guilty. Matt trusts on Jesus’s promise to a criminal who could only offer back his faith. With Jesus is grace.

3. BEHOLD (JOHN 19:26)
What do you think about when you suffer? We know what Jesus thought about. He offered words of consolation in his moment of tribulation. He gave his mother the gift of a son and his friend, John, a task to behold, “your mother.” Beholding Christ’s words of kindness is a motivator for Matt’s compassion and confidence in God’s affection for him.

4. FORSAKEN (MATTHEW 27:46)
The death of Christ was not an accident. The Bible predicted it centuries before. From Genesis to Psalms to Zechariah, God’s Word describes a suffering Messiah. Jesus experienced that suffering. At the cross, he died for the sin of the world. He purchased eternal life, as referenced in this forsaking he prays; the God-man, for the rebel, the Christ, for the Matts.

5. I THIRST (JOHN 19:28)
Jesus was fully man. Throughout Jesus’s earthly life, he thirsted, hungered, and tired. The Bible says he “In every respect has been tempted as we are, yet without sin” (Hebrews 4:15). Christ understands the agony and temptation that Matt experiences. The words of Christ on the cross about thirst were one more example that Jesus completely embraced humanity. He knows Matt better than anyone else. He understands the most basic human desires and needs.

6. IT IS FINISHED (JOHN 19:30)
What Jesus accomplished on the cross was incredible. History pivoted at that point. Through faith like the criminal, God forgives, redeems, heals, loves, fills, empowers, and promises more than one can ask or imagine. Through Jesus’s words, Matt grasps God’s finished work for him when his schizophrenic reality screams otherwise. Matt has hope that goes beyond this life, to the next where bodies don’t fail and sin is no more. That could be why Matt loves the book of Revelation so much.

7. FATHER (LUKE 23:46)
Jesus ended his dying words as he began with speaking to his Father. For practical purposes, Matt has no earthly father, yet Jesus’s prayer reminds him he does have a heavenly one—a dad who loves and cares for him regardless of his past and present. He loves him to death.

To many, Matt’s outlook is bleak: living at his mother’s house, on disability, with a couple of bucks left over each month to buy a carton of Marlboros. Still, the spiritual riches he possesses, anchored to Christ’s words, rivals the wealth of the godless palaces and fortunes of history. What treasure does Matt possess? Christ’s words and Christ’s work for him.

How about you? As you move through the chilly winter, where is your pain and need for Christ’s words? How have you hurt others or yourself and need God’s forgiveness? Flee to the Word of God. Cling to it as if your life depended on it. It does. Those words were inspired, spoken, written, and preserved for you. They are a gift, an invitation to a deeper relationship with the Lord. Amid your hurt and pain, may you know Christ more deeply than ever.

* “Matt” permitted use of his story, but his name has been changed for privacy.

You can check it originally out HERE.