A Destiny of Undying Greatness: Kiffin Rockwell and the Boys Who Remembered Lafayette by Mark M. Trapp (Giveaway) 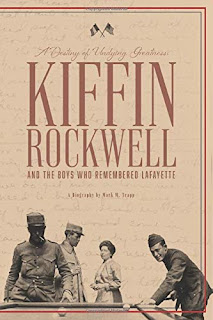 Goodreads is giving away 10 copies of A Destiny of Undying Greatness: Kiffin Rockwell and the Boys Who Remembered Lafayette

During the first two and a half years of World War I, the example of Kiffin Rockwell and other idealistic American boys fighting for France shone like a beacon across the Atlantic Ocean, summoning America to take its rightful part in the ongoing struggle for civilization. Intent on paying what they saw as their debt to Lafayette, who had played such a key role in America’s fight for independence more than a century earlier, Kiffin and a handful of other like-minded young men ignored President Wilson’s declared neutrality and came together in France, first in the trenches as simple volunteer soldiers and then in the skies as part of an all-American squadron of the world’s first fighter pilots.

The noble deeds and unbelievable courage of these boys drew the attention of the world and helped galvanize their countrymen to action. Eventually, more than a million U.S. soldiers would cross the Atlantic to help save France. All of them followed in the footsteps of Kiffin Rockwell.


Played out against the almost unfathomable carnage of the war, the sinking of the Lusitania and the presidential election of 1916, this book sheds new light on the unforgettable true account of Kiffin Rockwell and the “boys who remembered Lafayette.”