On Babies & Bathwater: Lauren Was Wrong...and So Are We 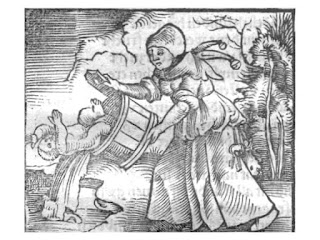 I love Christian music. Really, I just love music, period, but especially music that takes hold of my heart and mind and turns my gaze toward the glory and supremacy of Christ. When the sound and content of a song commands my ear, and the beauty and power of a performance stirs my soul, I am transported to realms far beyond myself. Lauren Daigle is one who often takes me there.

Lauren Daigle is a wildly popular Christian singer, who has recently found significant popularity in mainstream markets with her warm, engaging voice. Daigle has been making the talk show circuit, and she has come under fire of late from a variety of people in the wake of these interviews.

Most of the biggest criticism centered on statements the singer made on an iHeartRadio interview in December 2018, intimating that she didn’t know whether homosexuality was a sin. Daigle encouraged listeners to read the Bible and come to their own conclusions. She reportedly added, “And when you find out, let me know, ‘cause I’m learning, too.”

Now, I need to be very clear at this point and say that I was saddened to hear these quotes from one whose voice has so often ushered me into the presence of God. I was saddened because it was, as simply as I can say it, the wrong answer, and I expected more from her. It was the wrong answer because the Word of God leaves no ambiguity about homosexuality as sinful conduct that God says is wicked and unacceptable, just like any other sexual activity outside of marriage between one man and one woman. He created us and designed marriage, sexuality, and family to illustrate His relationship with His people. Any other version of romantic and physical intimacy is sinful and, at its root, tantamount to blasphemy because it distorts the picture of who God is.

In the intervening weeks, I have seen numerous posts, tweets, memes, videos, and articles castigating Miss Daigle as a heretic. I watched an internet video host, whom I generally enjoy and respect, as he dismissed Daigle’s entire body of work as without value and essentially attacked her very salvation. This kind of oversimplified, “nuke-‘em-all” approach troubles me greatly, and it is not reflective of the gentle, yet immovable, strength of our Lord, Jesus Christ. To paraphrase Paul in Ephesians 4:15, speak the truth, yes, but always do so in love.

I may have been disappointed in Daigle’s response, but I was neither shocked nor overwhelmed, because I learned long ago that singers are just singers—people who sing—no more and no less. Very few of them are trained theologians; few of them are trained as ministers. They are people—Lauren Daigle is a person—no different from the rest of us, except in vocation. It is that vocation, that “platform” as we often say in Christian circles, that becomes a sticking point in our thinking. We tend to elevate celebrities as if they are somehow better, wiser, than the rest of us; then, when their humanness, their frailty, their flaws, are inevitably exposed, we are outraged.

To be sure, I believe that Lauren Daigle could have—should have—had a better, more accurate, more complete answer prepared and settled in her mind before giving these interviews. After all, is it even possible that any well-known—let alone "famous"—Christian could expect to avoid such questions? Don’t we all need to be ready to give a cogent answer regarding what the Bible actually says about such “hot topics” in our world?

Therein lies the heart of the problem. Daigle needed a better--more cogent, more logical, more Biblical—response. If that was the answer she thought through and planned out after wrestling with it, then it fell woefully short; if she was unprepared and caught off guard, then shame on her for failing to prepare for perhaps the most easily-anticipated line of questioning a Christian could expect in America today…but she is not alone. We all bear that weight of failure. Lauren was wrong…and so are we.

It is easy to criticize Daigle for dropping the ball, even to denounce her as a heretic over her alleged failure, but how many of us are ready to comfortably state in a clear, unambiguous, but loving way that a particular action, thought pattern or way of life is condemned by God without hedging? How much more difficult does that become for us when a clear, direct answer flies in the face of social convention or hurts the emotions of people we love? Before we start throwing stones at the sins of celebrities, let us make certain that we ourselves are not guilty of the very sin we so vehemently condemn.

We cannot win people to Christ with muddy thinking or murky teaching, but neither will we attract people to Christ by tearing others apart for their shortcomings—especially when we share those same shortcomings. Therefore, let us learn from Lauren’s moment without casting her aside—for it is only a part of who she is. Let us never fail to lovingly, gently, but firmly speak the truth as truth, but let us also never throw the baby out with the bathwater.