No Wonder They Call Him Savior 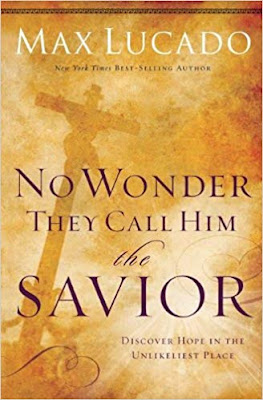 I just finished No Wonder They Call Him the Savior: Discover Hope In The Unlikeliest Place

. I really enjoyed the book. He writes short punchy chapters. You can read on and just ponder it or you can read a bunch and walk away encouraged. It is about 170 pages and came with a study guide. I think you will enjoy it.


Here is a sample from my favorite chapter was Come Home...

The practice of using earthly happenings to clarify heavenly truths is no easy task. Yet, occasionally, one comes across a story, legend, or fable that conveys a message as accurately as a hundred sermons and with ten times the creativity. Such is the case with the reading below. I heard it first told by a Brazilian preacher in São Paulo. And though I’ve shared it countless times, with each telling I am newly warmed and reassured by its message.

The small house was simple but adequate. It consisted of one large room on a dusty street. Its red-tiled roof was one of many in this poor neighborhood on the outskirts of the Brazilian village. It was a comfortable home. Maria and her daughter, Christina, had done what they could to add color to the grey walls and warmth to the hard dirt floor: an old calendar, a faded photograph of a relative, a wooden crucifix. The furnishings were modest:

a pallet on either side of the room, a washbasin, and a wood-burning stove.

Maria’s husband had died when Christina was an infant. The young mother, stubbornly refusing opportunities to remarry, got a job and set out to raise her young daughter. And now, fifteen years later, the worst years were over. Though Maria’s salary as a maid afforded few luxuries, it was reliable and it did provide food and clothes. And now Christina was old enough to get a job to help out.

Some said Christina got her independence from her mother. She recoiled at the traditional idea of marrying young and raising a family. Not that she couldn’t have had her pick of husbands. Her olive skin and brown eyes kept a steady stream of prospects at her door. She had an infectious way of throwing her head back and filling the room with laughter. She also had that rare magic some women have that makes every man feel like a king just by being near them. But it was her spirited curiosity that made her keep all the men at arm’s length.

She spoke often of going to the city. She dreamed of trading her dusty neighborhood for exciting avenues and city life. Just the thought of this horrified her mother. Maria was always quick to remind Christina of the harshness of the streets. “People don’t know you there. Jobs are scarce and the life is cruel. And besides, if you went there, what would you do for a living?”

On her way to the bus stop, she entered a drugstore to get one last thing. Pictures. She sat in the photograph booth, closed the curtain, and spent all she could on pictures of herself. With her purse full of small black-and-white photos, she boarded the next bus to Rio de Janeiro.

Maria knew Christina had no way of earning money. She also knew that her daughter was too stubborn to give up. When pride meets hunger, a human will do things that were before unthinkable. Knowing this, Maria began her search. Bars, hotels, nightclubs, any place with the reputation for street walkers or prostitutes. She went to them all. And at each place she left her picture—--taped on a bathroom mirror, tacked to a hotel bulletin board, fastened to a corner phone booth. And on the back of each photo she wrote a note.

It wasn’t too long before both the money and the pictures ran out, and Maria had to go home. The weary mother wept as the bus began its long journey back to her small village.

It was a few weeks later that young Christina descended the hotel stairs. Her young face was tired. Her brown eyes no longer danced with youth but spoke of pain and fear. Her laughter was broken. Her dream had become a nightmare. A thousand times over she had longed to trade these countless beds for her secure pallet. Yet the little village was, in too many ways, too far away.

As she reached the bottom of the stairs, her eyes noticed a familiar face. She looked again, and there on the lobby mirror was a small picture of her mother. Christina’s eyes burned and her throat tightened as she walked across the room and removed the small photo. Written on the back was this compelling invitation. “Whatever you have done, whatever you have become, it doesn’t matter. Please come home.”

A Valiant Ambition by Nathaniel Philbrick
Wonder by R. J. Palacio
Reaching and Teaching by David Sills
Preaching and Preachers by Martyn Lloyd-Jones
Johnstown Flood by David McCullough
A Forest, A Flood, and an Unlikely Star by J. A. Myhre
Practicing the Power by Sam Storms
Praying the Bible by Donald Whitney
Labels: Book Review