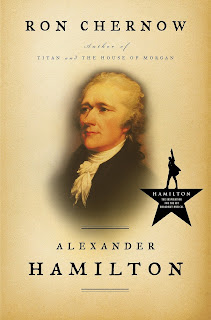 by Ron Chernow. This book was so great! Chernow brings life and humanity to the Founding Fathers of America. Things were the not ideal we learn about in grade school. The more perfect union was less than perfect. The author did a fabulous job and it is a must read for all who want to know American History.

Did you know, Hamilton was responsible for the national banking system? He wrote most of the Federalist Papers that helped organize our government. He was so prescient. He predicted the Civil War and the need for a standing army, and military academies. He founded the Coast Guard and was an essential part of Washington's staff.

He rose out of the ashes of foreign birth with parents that separated, though never married. His drive and intelligence got him far, but his lack of self-control and pride led to his downfall. He was unfaithful to his wife whom he loved and caught in a blackmail situation. He confessed it all. Consequently, he fell from power.

Throughout Hamilton's career, he opposed and offended Vice-President Aaron Burr, among other people. Eventually, Burr challenged him to a duel. Hamilton, not one to back down, accepted. He was intent on just wasting his shot because he did not want to kill. Burr was intent on killing. Burr and Hamilton both got their way, Burr killed Hamilton and through Hamilton's death Burr's career died and Hamilton preserved some honor.

I think you will love this book. It is lengthy, 800 some pages, but it is worth it.